The FSB Initiative is a 501c3 non-profit organization that has one simple mission, help homeless Veterans off the street and on their feet! Our President was a homeless veteran in 2016. He was in a program that really helped him get back on his feet and then transferred to a program in Delaware that was not doing what it needed to for our Veterans. He vowed to start a program that would really make a difference in a homeless Veterans’ life. Our ultimate goal is to have our own shelter.

We go out into the homeless community and help homeless veterans with clothing, hygiene, food, and any other comforts we can give. However, the help does not stop there. We work with them if they have addictions and offer to get them into treatment if they desire. FSB can help get them shelter, employment, and other services. A homeless veteran qualifies for care through the VA even if it is not service-connected. As long as they are under the care of a program they will get the medical help they need!

Without the help of donors, we cannot complete our mission. We are working on items that can be purchased and 100% of it goes to help us help our Veterans who we owe a debt of gratitude that can not be repaid. There are no paid employees so 100% of all donations go to help men, women and their children if needed get off the street and on their feet.

We currently work with homeless veterans from Delaware, Maryland, and Pennsylvania and hope to expand beyond that. With your HELP we can and will help put a major dent in the homeless epidemic. – Thank you

Below is why we do what we do! There should be no homeless people in the U.S. let alone one single Veteran. As a one time homeless Veteran I understand the plight and I/we know what must be done to help them. We are not giving them a handout, we are giving them a hand up!!!

Who are homeless veterans?

The U.S. Department of Veterans Affairs (VA) states that the nation’s homeless veterans are predominantly male, with roughly 9% being female. The majority are single; live in urban areas; and suffer from mental illness, alcohol and/or substance abuse, or co-occurring disorders. About 11% of the adult homeless population are veterans.

Roughly 45% of all homeless veterans are African American or Hispanic, despite only accounting for 10.4% and 3.4% of the U.S. veteran population, respectively.

About 1.4 million other veterans, meanwhile, are considered at risk of homelessness due to poverty, lack of support networks, and dismal living conditions in overcrowded or substandard housing.

How many homeless veterans are there?

Although flawless counts are impossible to come by – the transient nature of homeless populations presents a major difficulty – the U.S. Department of Housing and Urban Development (HUD) estimates that 40,056 veterans are homeless on any given night. ... See MoreSee Less

If you shop on Amazon you can help out the FSB Initiative by going to smile.amazon.com and searching for us, each purchase you make Amazon donates a percentage of each item sold to our 501c3. Thank you for any and all assistance to our program. ... See MoreSee Less

When you shop at AmazonSmile, Amazon will donate to Fsb Initiative Inc. Support us every time you shop.
View on Facebook
·Share

**Update on the Outreach in Cecil County MD set for tomorrow will now be rescheduled to 3/13/2021.

We apologize to anyone who may have planned to come out and assist with this change of plans. ... See MoreSee Less

i will be at that one brother

You can also mail a donation to the above address 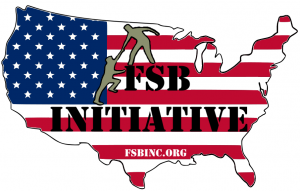 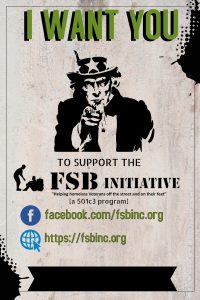